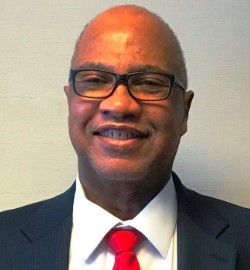 After 22 years on the bench, the Honorable Michael T. Jamison retired as a Circuit Judge for the State of Missouri. He is a mediator with United States Arbitration & Mediation (USA&M). Judge Jamison is an adjunct professor for St. Louis Community College. He has taught business Law, employment Law, contracts and administrative Law, as well as economics.

From 1994 to 1997, he engaged in the corporate practice of law as an Associate General Counsel in the Labor Law Section of the Legal Department of Anheuser-Busch Companies. Prior to then, he was employed as a field attorney, trial specialist with the National Labor Relations Board, where he handled numerous unfair labor practice investigations and litigation.

Judge Jamison was a senior associate with Lashly & Baer, P.C. for two years after leaving the federal government. His practice consisted of labor and employment law, governmental law, and education law on behalf of the St. Louis Public Schools.

He is licensed before the Supreme Court of Missouri and admitted before the Supreme Court of the United States. He has practiced before the National Labor Relations Board, the United States District Courts for the Eastern District of Missouri, and Southern and Central Districts of Illinois.  Mr. Jamison is a member and former President of the Mound City Bar Association.  He is a member of the Missouri Bar, the Bar Association of Metropolitan St. Louis, the St. Louis County Bar and the National Bar Association.  He is a former board member of the Bar Foundation of St. Louis. He is a board member with the Betty Jean Kerr People’s Health Centers and a board member of the Northside Youth and Senior Service Center, Inc.  He is a member and former Justice for Phi Alpha Delta, legal fraternity, and was editor of the quarterly law student journal, BALSA Reports.  He has received numerous awards and commendations.